Griffons Bush Camp
Welcome to SafariNow. Get off your accommodation booking by paying with the voucher code before . 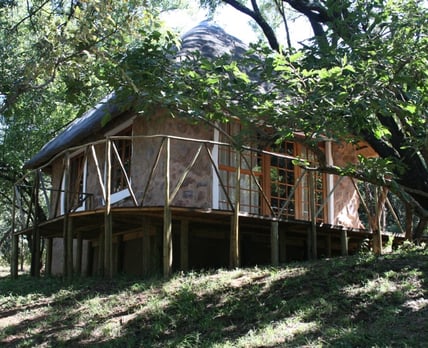 Nestled in a mountainous amphitheater, at the highest point in the Waterberg, lies Griffons Bush Camp. On its own exclusive and private property within Marakele National Park, the gigantic views stretch forever, and the local residents have made the most of the views too, with the largest Cape Griffon colony in the world inhabiting the cliffs above the camp.Griffons is set in a fig and acacia forest on the slopes of the mountain on over 1000 hectares of Waterberg bushveld. Here visitors can enjoy many guided nature trails, from steep and demanding to leisurely and relaxing. Griffons lies within Marakele National Park which hosts Africa’s Big 5 game species. The lodge also offers game walks and trails, and from Griffons Bush Camp as a base, visitors have a choice of self-drive or guided game drives in our sector, and in Marakele National Park. A high clearance vehicle is recommended for some of the roads, and our guided game drives into the park are undertaken with Griffons four-wheel drive game viewing vehicles.Good news is that many of the roads are being re-surgfaced at the moment. For the birder there is of course the opportunity of viewing the Cape Griffon colony, consisting of hundreds of breeding pairs, and their unique behaviour. There are numerous specials in the area and sightings of Gurneys Sugar-bird, Orange-breasted Bush shrikes, White Helmet shrikes, flapper larks and breeding pairs of Verreaux’s eagles are fairly common. Less common sightings of Gymnogene and Brown Snake eagle and Black-breasted Snake eagle have also been recorded from time to time.Predator sightings include lion, leopard, civet, genet, caracal, brown hyena, buffalo and black-backed jackal. Other wildlife you are likely to see at Marakele Lodge includes zebra, wildebeest, mountain reedbuck, bushbuck, impala, klipspringer, bush pig, baboon, monkey, common duiker, and numerous other small animals.In summer the mountain cascades with several mountain streams, offering many pools for the hiker to cool off in. A circular guided trail commencing near the vulture colony in the east and circling west to return to the colony would take the average hiker about five or six hours. Shorter walks up the mountain and to other scenic spots could take as long, depending on the level of fitness.Please note that this is a rustic bush camp we have solar energy and the water comes from the mountain streams. We offer chalets made of the local stone and thatch, each with own ablutions and coffee station and braai, and there is a communal kitchen with all facilities, too. As we are within the boundaries of a national park, the chances of meeting wild animals is great, even en route to the bush camp!

Safari: Griffons Bush Camp offers game walks and trails, and from the Bush Camp as a base visitors have a choice of self-drive or guided game drives into Marakele National Park.

29 guest reviews Reviews of
★★★★★
4 out of 5 stars
5 star 10
4 star 16
3 star 3
2 star 0
1 star 0
Sally Franckeiss
★★★★★
06 January 2020
The tranquil setting of this bush camp is absolutely amazing. Sitting on the deck watching wildebeest, zebra, warthog, bush buck was a rear pleasure. In the early evening kudu's and steenbok made an appearance. Bird life was prolific with the cape griffon vultures soaring in the thermals above the camp in the early evening. This is a bird lovers paradise.For those that like there creature comforts, cell reception electricity this is not for you. The camp has solar lights in the rooms and gas fridges in the main entertainment area. Outside shower and toilet was a new experience not unpleasant...
see more
Jacques Goosen
★★★★★
18 July 2019
The bush and rustic facilities. Attentive host
Elvera Viljoen
★★★★★
20 June 2018
We enjoyed the remote location and the silence. We had antelope walking past our cottage. The road is not really suitable for a sedan. One has to come prepared knowing that there is no electricity and no cell phone reception. There is a solar panel for lights only.
Peter Springer
★★★★★
04 April 2018
We were lucky to be upgraded to the guest lodge, with more space and private amenities. On arrival however, we were a little disconcerted as to the aged state of the old farmhouse. Everything was clean and there were plenty of rooms, kitchen utensils etc, but the building needs a lot of TLC - e.g. a few leaks in the roof, some tiles missing from the walls, ceilings in disrepair. It needs modernising, and clearing up of personal paraphenalia. We did not mind the rustic feel, however it was not the "bush getaway" that we expected.On the positive side, Alois, the camp manager, was a true gem!...
see more
Willie Badenhorst
★★★★★
19 November 2017
Everything was very nice, a little bit of electricity would help.
Show More Reviews

Click to display the map
Griffons Bush Camp is 23.2km from the centre of Thabazimbi , the nearest airport 104.5km (Pilanesberg International Airport).
*Distances are shown as the crow flies and not necessarily the actual travelling
×