Hotel Santo Amaro
Welcome to SafariNow. Get off your accommodation booking by paying with the voucher code before . 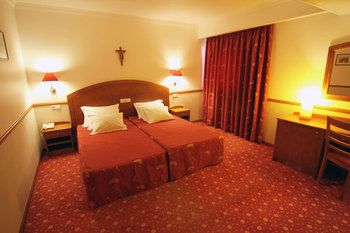 This residential is a familiar welcoming establishment. The owner Mrs Maria Odete Marto is still in the young Shepherds Family, being the second hand cousin to Jacinta and Francisco. Initially the were only two bedrooms and a ceiling, where olive cloths and corn leaves were placed to welcome the pilgrims who came only be the 13th of May and October. Some pilgrims spent the night praying in the sanctuary, and when the nights were too cold they'd come and warm up with a cup of coffee or soup. The Pope Paul VI was the first pope to ever visit Fatima back in 1967 and by that year the house had 10 more rooms, a coffee shop and store to sell photographic films. By then, Candida, the hirdresser had also settled in. In 1984 the house opened with the commercial warranty. This house name derives from a place with the same name near the city of Ourem. In this place there is a small chapel in honour to Saint Amaro. By Janaury 15th this day, is celebrated with a mainly religious feast, where the celebrations as wll as the traditional tibit and the familiar reunion take place. There one can experiment the famous pine seed and also lamb (a characteristic meal from that region)!

Click to display the map
Hotel Santo Amaro is 2.5km from the centre of Fatima , the nearest airport 1272.7km (Newquay Cornwall Airport).
*Distances are shown as the crow flies and not necessarily the actual travelling
×