Slot Loevenstein
Welcome to SafariNow. Get off your accommodation booking by paying with the voucher code before . 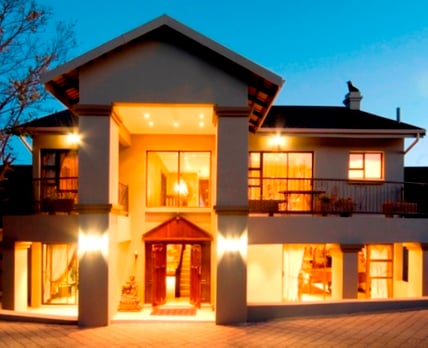 Slot Loevenstein is a luxury guest house set in the sought-after Northern Suburbs of beautiful Bloemfontein, City of Roses. Slot Loevenstein pays homage to this floral heritage in its beautifully appointed rooms.

The guest house draws inspiration from its African surroundings which reflect a rich European influence, as well as from the alluring castles and chateaus of Europe. This European influence is specifically predominant in the name, Slot Loevestein, which comes from the Netherlands.

The Dutch Slot Loevestein is a medieval castle that was built in 1368 by knight, Dirc Loef van Horne. Its strategic location at the confluence of the Maas and Waal rivers saw the castle used as a tolling station, military base and state prison, from where the renowned lawyer Hugo Grotius famously escaped.

This medieval influence seamlessly integrates with classic French styles, including French Provençal, at Slot Loevenstein guest house. The result is an eclectic mix of elegant interiors, where chateau charm is perfectly balanced against timeless classical décor, complete with antique pieces.

Slot Loevenstein offers 10 fully-serviced and sumptuous en-suite rooms, the main suites of which feature spa baths. The guest house is warm and inviting and the perfect base from which to explore the region. Our rooms reflect the same elegant, yet relaxed air that is evident throughout the rest of the guest house, and for which Slot Loevenstein is renowned.

We also offer a state-of-the-art conference facility that can accommodate up to 30 people. It features a smart board, projector, plug points for laptops and Internet connectivity. Our sun-washed pool deck caters for al fresco dining and cocktail functions, and features an authentic pizza oven, a facility for traditional South African barbecues and a children’s play area. The castle-inspired playhouse is a favourite among our younger guests.

The Slot Loevenstein lounge is used for intimate soirées, with pianists and artists performing to private audiences. The pièce de résistance of this room is the stately Pleyel Clavier piano, which was produced by the renowned Pleyel et Cie piano firm in Paris in the early 19th century.

Spa: If you require that extra special treatment for the day, a quick visit to the spa just around the corner will just the thing for you.

Conference Venues: We can accommodate up to 25 delegates around tables and 40 delegates cinema style. We have a projector high tech smart board as well as flip chart available.

Family friendly: With a pool, playground, outside "braai" area, make yourself a pizza oven are just a few of our things that helps us to accommodate you and your family.

Romantic: Fire places, lapa, special lighting in rooms and special jacuzzi baths in some of our rooms all make an idea; venue for you romantic visit.

8 guest reviews Reviews of
★★★★★
4.5 out of 5 stars
5 star 5
4 star 3
3 star 0
2 star 0
1 star 0
Hanri van der Walt
★★★★★
13 June 2018
Enjoyed the bathroom very much..lovely bath and shower.
Ferdie Visser
★★★★★
29 December 2017
I enjoyed my stay and wished I actaully booked for longer. The rooms are beautiful and the buildings are well maintained and clean. The staff are very friendly and helpful.
James McIlwaine, South Africa
★★★★★
29 December 2016
Great place to stop in Bloem, just a pity it was only one night. The lady went the extra mile to try to find us a place to eat ( New York) that was also excellent .
carol malie, South Africa
★★★★★
30 November 2015
Slot is WOW!!!!!I have no words to explain the beauties of the place and the people rendering the service. An outing to never forget.Planning to go back very soon 👌
Marinka Hoek, South Africa
★★★★★
26 October 2015
Room was not ready when we arrived to check in at 16:00. Staff were helpful and friendly. Rooms were clean and comfortable.
Show More Reviews

Click to display the map
Slot Loevenstein is 1km from the centre of Dan Pienaar , the nearest airport 7.7km (New Tempe Airport).
*Distances are shown as the crow flies and not necessarily the actual travelling
×